Say no to vaccine mandates Keep up the good work Boycott Kmart
CitizenGO
is a community of active citizens that seeks to promote the participation of society in politics.
we are 16,641,242 active citizens join us now!
What do you want to change? Create your petition! DC Comic decided to launch its "bisexual superman". Write to the editor and demand a stop in your social engineering strategy The UN agency tasked with elevating the status of women around the world is now attacking the same women it is supposed to be protecting and promoting.

The UN Women is now pushing for the scrapping of the titles "woman" and feminine in the name of gender equality.

This goes contrary to what many would think would be the mandate of the UN agency which also bears the word "Women" in its name. 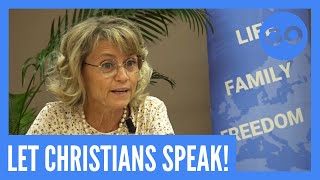 Sadly, in today’s culture, it is an ever growing trend for those not following the status quo to face persecution and in some cases, imprisonment.

The latest recipient of this kind of persecution is Finnish parlimentarian Päivi Räsänen who is facing jail for posting a Bible verse on her personal Twitter account. Just when you thought it couldn't get any worse, the Australian Broadcasting Commission (ABC), in an attempt to be "woke", has been busy indoctrinating little children with poisonous gender fluid ideology.

A recent ABC Kids Community Facebook post featured a radical homosexual drag queen discussing gender fluidity with little children. The video has been viewed over 2 million times. This couldn't be any more inappropriate or disturbing! The Unicode Consortium, the association that regulates text characters on the internet, has announced a new set of emoji to be used in the upcoming Unicode 14.0 for all smartphones. It includes the emoji of 'a pregnant man'.

Following the introduction of the transgender flag, the man in a wedding veil and the gender-neutral Father Christmas, the international Unicode team has decided to encode yet another folly of the gender frontier, namely the image of those transgender people who identify as "daddy seahorse". This time it is not Netflix who is going astray, but director Paul Verhoeven and the Zurich-based production company Pathé Films AG. His film "Benedetta" was shown as a competition entry at the film festival and is soon to be released.

0500,000
228,468
228,468 signatures
· by CitizenGO
Sign this petition!
CitizenGO
is a community of active citizens that seeks to promote the participation of society in politics.
we are 16,641,242 active citizens join us now!
What do you want to change? Create your petition!
Start a petition